"Belief is Trust & Trust is Faith" "Every Human Being find 'GOD' In Temple,Mosque,Church but 'He' is no-where.He is in between Only the service of mankind. Let's Find 'GOD' with help of the helpless People and make this Earth like as another heaven." 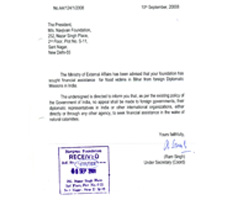 The Message means a usually short communication transmitted by words, signals, or other means from one person, station, or group to another. A message in its most general meaning is an object of communication. It is something, which provides information; it can also be this information itself. Therefore, it’s meaning is dependent upon the context in which it is used; the term may apply to both the information and its form. A communiqué is a brief report or statement released by a public agency.

More precisely, in communications science, a message is information, which is sent from a source to a receiver. Some common definitions include: Any thought or idea expressed in a language, prepared in a form suitable for transmission by any means of communication. An arbitrary amount of information whose beginning and end are defined or implied. In communication between humans, messages can be verbal or nonverbal: A verbal message is an exchange of information using words. Examples include face-to-face communication, telephone calls, voicemails, etc. A nonverbal message is communicated through actions or behaviors rather than words. Examples include the use of body language and the actions made by an individual.

There are two main senses of the word message in computer science: messages passed within software, which may or may not be human-readable, and human-readable messages delivered via computer software for person-to-person communication. Message passing is a form of communication used in concurrent and parallel computing, object-oriented programming, and interposes communication, where sending messages to recipients makes communication. In a related use of this sense of a message, in object-oriented programming languages such as Smalltalk or Java, a message is sent to an object, specifying a request for action. Instant messaging and e-mail are examples of computer software designed for delivering human-readable messages in formatted or unformatted text, from one person to another.

There are many more type of message but in case of this organization various message have been received from India and abroad like National Human Right Commission and State Human Rights Commission, State Governors, Chief Ministers of States, Dist Collectors, State High Courts and Supreme Court Of India, National and States Legal Rights, Prime Minister and President Of India, State and Central Ministries and various Embassies in India and on the same time from out side of country like Most of the NRI from different part of World, White House of USA, person working in international law, different international NGOs in different part of world, World and other Banks, renounwed persons in the different part of World, International Court of Justice, departments and Rotary International, UNO departments and All worlds advocate association of USA likely on the work development , appreciation, guidance, advice, greetings etc. So Navjivan Foundation appreciate these well-wishers and guider whose have well concentration on the organization. Because group of people or community can create good path for the development of this human society. The organization represent here some have message in separate link in the form.